Kerfe at Method Two Madness inspired me recently with this post, in which she drew some of the work of famous artists who attempted to capture the image of the Madonna.  I was so taken with her work that I decided it might be fun to attempt something in a similar vein.    I’m glad I did, because it may have been the most awe-inspiring day I’ve encountered so far in my art journey.

The image I sketched can be found at this link.   I know embarrassingly little about art history, but it was sketched by Leonardo da Vinci c. 1483, and is entitled Head of a Girl.  My attempt, in colored pencil: 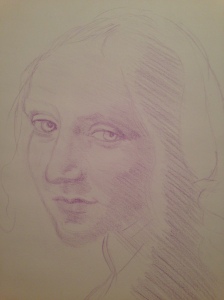 I’ve often described the tingly feelings I sometimes experience when drawing the face of someone I’ve admired.   This was an interesting exercise in the sense that I knew nothing about the young woman subject, but in attempting to copy da Vinci’s work, I felt instead a connection to the artist himself, stretching across centuries and an ocean besides, which left me feeling amazed and oddly satisfied, even though I put the sketch down half finished after staying up late with it the first night.

It also made me realize that I want to do more of this kind of work.  I really enjoy portraits, but drawing the work of one of the Old Masters carries its own built-in awe, regardless of the subject.   I found it quite moving, and I would have to be a much better writer to describe the experience more clearly.

I hope you’re doing the Saturday dance today, and that you have a truly enjoyable April weekend, whatever that means for you.  Peace and arty goodness to one and all!

I'd love to hear from you! Constructive criticism is most appreciated. Thank you! Cancel reply

Purchases support my site. Thank you!

Categories for your Entertainment